The Fosse Riders, A Potted History 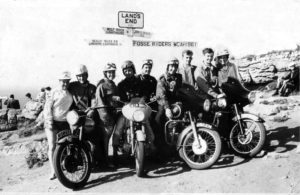 Those heady early days saw a strong membership base who came together to enjoy pony trekking, canal cruising, Sunday runs, and touring holidays abroad.
Weekly club nights were held in a succession of Leicester pubs, who were quite happy to play host to motorcyclists – until something a little more lucrative came along – or the landlord changed – or the building was demolished. These were all hurdles we faced at such venues as The County Arms, Blaby, The Golden Lion, Highcross Street, Great Central Hotel, Great Central Street. In 1972, having spent several months repairing and decorating a pub bowling alley in Broughton Astley, the club enjoyed it’s new facilities for only a few short weeks before eviction loomed in favour of Folk Evenings. It was decided that permanent premises were a must!

By sheer luck, a building in Western Park, just off the A47 Hinckley Road, belonging to the local MENCAP branch became available and many months of hard work by members went into making the detached single story building suitable for use as a club room. We are still there today and still meet on a Thursday evening.

The advantages of being independent have proved numerous. The club is able to offer social activities ranging from darts matches, and quiz nights, through to very lively Christmas Parties. The Club still maintains its close ties with MENCAP and for almost 40 years has provided marshals for the annual Combined Children’s’ Charities Walk which takes place in May each year.

Like many other motorcycle clubs, the Fosse Riders has seen its membership dwindle since the 60’s. However, to celebrate its 10th Anniversary the local Palais de Dance in Humberstone Gate was hired. The 25th Anniversary Dinner at the LC Football club was attended by many of the clubs founder members. The 50th Anniversary Dinner Dance took place at the Lodge on London Road on the 5th September 2009 where we enjoyed an evening of nostalgic memories.

A particular lean time for membership in the late 1980s led the committee to try the idea of a “Born Again Bikers Night”, intended to appeal to anyone hankering to get back onto two wheels after years of family and financial commitments. This was a resounding success and formed the basis of the present membership.

The Association produces its own web site and a unique range of tee shirts and sweat shirts (the logo was designed by a club member), which attract attention wherever they appear.